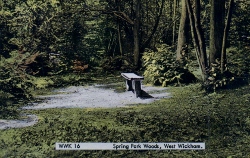 Spring Park is a 20 hectare (50 acre) public open space located in the London Borough of Bromley. It forms part of a larger area of open countryside, within the London green belt, that links London with the wider countryside of Surrey and Kent.

This site used to be part of a much larger expanse of woodland in the area belonging to the Wickham Court Estate. Centuries of growing and extracting timber products has heavily influenced its appearance as an ancient coppice woodland. Today it is an important remnant of a much larger wooded area and virtually all of the site is designated a Site of Nature Conservation Importance (Site of Metropolitan Interest) for this reason. 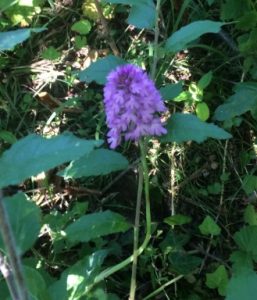 This pretty Pyramidal Orchid was spotted by the rangers flowering on the edge of the meadow amongst some low blackthorn scrub. As far as we know it’s the first record of a Pyramidal Orchid or in fact any orchid, to flower at Spring Park! The rangers will be keeping a close eye on it over the coming weeks to ensure it gets an opportunity to spread its tiny windblown seeds across the grassland.

Wiping away pollution
Pupils from year three at Wickham Common Primary School recently spent a morning on West Wickham Common. The children conducted experiments to see how the site is affected by pollution and to discover the important role trees play in cleaning up the air. In one experiment, ‘wet wipes’ were used to graphically show how much dirtier the leaves of roadside trees are as a result of particulate pollution from vehicle exhausts, when compared with the cleaner leaves of trees farther from the road. The children went on to discuss how they could avoid direct polluting the Common by taking their litter home and always clearing up after their dog.

Brownies exploring Spring Park
Brownies from Beckenham joined our Information Ranger Cora for a fun evening at Spring Park. The Brownies had a go at pond dipping where they found tadpoles, dragonflies, pond snails and pond skaters.

Afterwards the Brownies practised their clay making skills and created little pond and woodland creatures such a ladybirds, butterflies and stag beetles to take home.